“The Sun is also a Star” by Nicola Yoon

Natasha: I’m a girl who believes in science and facts. Not fate. Not destiny. Or dreams that will never come true. I’m definitely not the kind of girl who meets a cute boy on a crowded New York City street and falls in love with him. Not when my family is twelve hours away from being deported to Jamaica. Falling in love with him won’t be my story.

Daniel: I’ve always been the good son, the good student, living up to my parents’ high expectations. Never the poet. Or the dreamer. But when I see her, I forget about all that. Something about Natasha makes me think that fate has something much more extraordinary in store—for both of us.

The Universe: Every moment in our lives has brought us to this single moment. A million futures lie before us. Which one will come true? 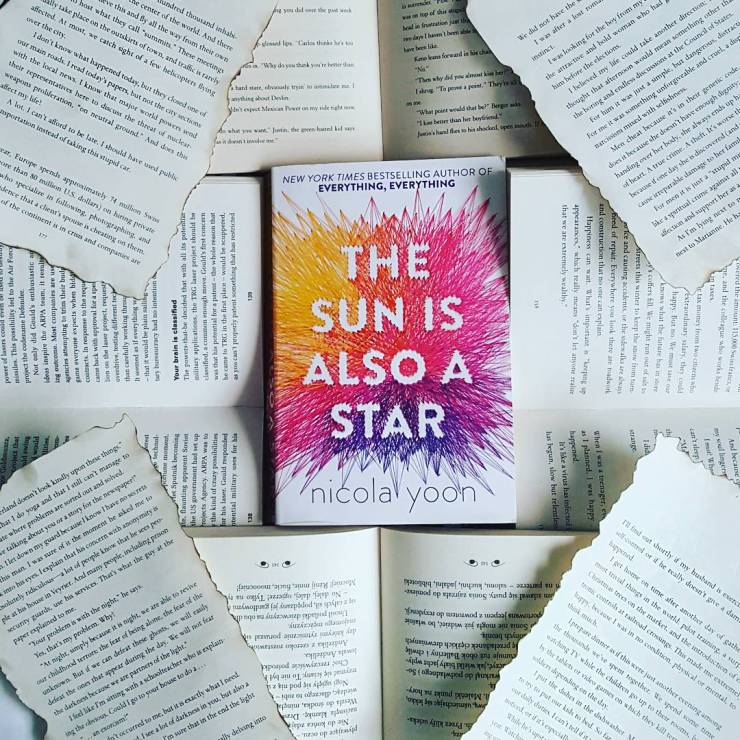 The chapters are very short and they alternate between perspective of Natasha, Daniel as well as other random characters that we meet in the story, e.g. a security guard or a waitress. I enjoyed the short chapters, it felt like it allowed me to read the book quite fast. When I started, those short chapters about additional characters felt like a good idea but with time I disliked them all. I failed to see the point of most of them, I thought it may add a little real touch to the world of characters but it has not.

It felt like the entire book was composed of unrealistic coincidences that took place within 12 hours period (336 pages), starting from very small, insignificant things such as a phone cover that lead to suicidal plans. I guess it was meant to represent as if the fate has been decided by the universe itself that has tried everything in its power to make Natasha and Daniel come together. However I thought it felt forced and unrealistic. I didn’t count but the number of coincidences was way above rational for half a day timeline.

The two main characters, Natasha and Daniel, were supposed to represent two entirely different, unique entities, and as much as I could understand Natasha to an extent, I found Daniel to be very cheesy and to be honest, I didn’t like him at all. He was almost instantly in love with Natasha, saying he loves her as well as mentioning he feels lust for her, after couple of hours of this ‘relationship’. It was an instant love romance type of book, which I found to be very unrealistic just as everything that had happen to lead to it. Natasha wasn’t a very good character either. She had claimed many times to have a scientific mind, saying she won’t fall in love with Daniel, but she did it very quickly anyway. It is as if she gave up all of her principles, because she was horny (more or less) and I didn’t respect that at all. Whether I myself believe in love at first sight is insignificant, because the one in this book didn’t feel real for me, didn’t feel like something I could connect to. I rolled my eyes many time when reading it, a lot of things didn’t work well with each other.

I liked the premise of the story, I see its potential, yet I don’t think it was met. I enjoyed the story of immigration, the struggle it comes with and the isolation one may feel. I think that was developed really well but the cheesy romance killed majority of that. By the time I reached the ending, I wish I was better at maths to calculate the probability of all the coincidences that happened in this story, especially the Epilogue.

Saying Goodbye to one of my favourite bookshop in Dublin, Chapters. They'll be missed greatly as they're closing their doors this Monday 🙃
Not all books are made equally.
Gabriel's artwork is one I've been following for a while now. He has this tremendous talent in my opinion, to convey emotions of 2D characters very clearly and it is something he showcases again in Teen Titans: Beast Boy 🐺
Happy New Year!
Is this...is this me posting after months of inactivity on this account?
What book are you planning to read next? 📚
Loading Comments...
%d bloggers like this: